Today I am welcoming Suzanne Adair to an author interview. I first came across Suzanne's writing at the end of last year, and have been getting more familiar with it since. I have previously reviewed Hostage to Heritage and Camp Follower. 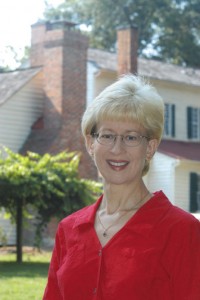 She writes about the American War of Independence, so an interview for July 4th seemed perfect!

Q. Suzanne, what first attracted you to write about the war of independence?

A. Thanks for inviting me to be your guest today, Richard. What fun, talking about the American War of Independence on the Fourth of July—on a Brit’s blog, of all places!

Although a number of wars have been fought on American soil, the War of Independence has always resonated the most with me. I’m fascinated with the changes in Western people’s heads during the late eighteenth century. They were exploring with telescopes and microscopes and even periscopes. The printing press made it possible for many to own books and become better educated than their forebears. Middle-class people could find leisure time. Government and religion weren’t as tightly bound as they’d been in previous centuries. And the stirrings of the women’s rights movement can be found during this period.

For over two hundred years, history scholars focused almost exclusively on the northern theater of the American War (especially New York, Pennsylvania, and Massachusetts). About fifteen years ago, they finally began researching the southern theater (the Carolinas, Virginia, Georgia, and Florida) in earnest. As new documents come to light, and field researchers shift their efforts southward, it’s changed the shape of this war. Scholars now believe that the colony having the most battles was South Carolina. My series is set in the southern theater, so I find all this quite exciting. It helps make the historical background fresh for my readers and me. 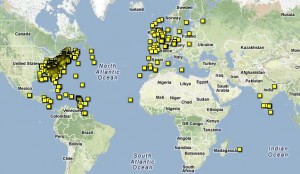 John Robertson - military actions in the War of Independence

How has the shape of the war changed? A few years ago, my cartographer friend John Robertson (who has created the maps for most of my books) plotted each military action from the War of Independence as a yellow square on this map of the world. It’s clear that this war wasn’t confined to the northern theater. Nor was it confined to America. In fact, it looks like a world war. What do you think?

Q. As a Brit, this is a subject I knew very little about except for some anecdotal tales, such as the Boston Tea Party. It comes across in your books as a troubled and confusing time in which allegiances were uncertain and often shifted. Could you tell us a little about the background here?

A. Certainly. In wars throughout history, almost never do you find that all people in an affected civilian population give their allegiance to one of two sides. That’s the way it’s often written by the victors, and thinking of it that way makes it simpler for history students. But what you actually find is that a third to a half of the civilians are neutral. They have no strong feelings about which side should in charge as long as they can carry on with their lives.

Unfortunately when an army comes into an area, neutrals don’t fare well for the reason that they haven’t given their allegiance to either side. During the American Revolution, neutrals were often regarded with suspicion and had their belongings (livestock, crops, etc.) seized for an army’s use without compensation. They were also forced into military service and, if captured by the army’s opponent, might be forced to switch and fight for that side, all the while wondering if they’d ever see home again.

Q. You describe your writing on your web site (http://www.suzanneadair.net/) as “historical crime fiction.” What drew you into the crime/mystery side of writing? Do you see your main audience as enthusiasts of historical fiction or mysteries?

A. The solving of a fictional crime such as a murder or caper often conveys tighter structure upon a novel, and I definitely take advantage of that structure. In addition, the idea of having a protagonist solve such a crime without the benefit of modern forensics is a challenge that appeals to me.

My main audience is a blend of readers who enjoy historical fiction and historical mysteries. A few have told me that they were initially drawn to my work from the mystery angle but somewhat apprehensive about the historical element, fearing that they’d be overwhelmed by period detail. Then, after reading my books, they compliment me for weaving in the history unobtrusively and not smothering them with details. “Not at all like sitting through history class!” said one reader. (Huzzah!)

Q. You bring in to your books other cultural elements such as religious and social diversity. The period comes over as a real melting pot of personal background. Does this reflect the written sources of the age?

A. Many readers don’t have a solid foundation in history. From high school history classes, they’ve come to believe that Revolutionary America was populated almost exclusively by white Protestant Christians. What a boring place the colonies would have been to live, if true.

Fortunately, when you do the research and check the sources, you find out that there was quite a diversity of religious and cultural backgrounds found among people living in the thirteen colonies and surrounding territories. (Take a look at an essay I wrote about this amazing diversity, http://www.suzanneadair.net/2014/07/09/religious-diversity-in-america-during-the-revolution/) For example, you learn that Thomas Jefferson read the Qur’an, probably incorporating ideas from it into the Declaration of Independence, and that a Jew named Haym Solomon gave a big loan to the Congress for the war effort. Integrating this kind of background into my fiction makes my Revolutionary universe a vibrant, interesting place.

Q. Your author profile on Amazon (http://www.amazon.co.uk/Suzanne-Adair/e/B003WH8Q36/) and Goodreads (https://www.goodreads.com/author/show/1188958.Suzanne_Adair) mentions that you have taken part in reenactions (just like Paula Lofting, who I interviewed in March). Which came first, the writing or the reenaction? Do you find that the two activities help each other?

A. Great question! The writing came first, but not by much. What happened was that I wrote several chapters of the first manuscript in the series and realized that I was unable to get into the head of my eighteenth-century protagonist. I wasn’t part of that culture; we were separated by two centuries. Thus I had no idea what shaped my characters’ decisions or what constituted their daily challenges.

That brought me to reenacting. The weekend events I attended recreated the history and immersed me in the social and political culture of the time. Of course, there’s nothing like living the real history. However reenacting is a sort of time machine to help me receive a good approximation of life in eighteenth-century America. As a result, my sensory impressions of that life found their way into my writing. My characters seem right for their time. Many readers say that I made them feel like they were actually there.

Q. I had imagined that the events you write about - so recent in comparison to my own storytelling - were quite thoroughly documented. However, your author's notes suggest that there are large areas of uncertainty, especially for actions in the Carolinas. How easy have you found it to find sources of information to underpin your writing?

A. The ease of finding source materials depends upon what you’re seeking. Most battles are very well documented, as are the lives of the more famous and/or wealthy people. It’s also easy to find information about the big cities and larger towns as well as common trades.

Step outside that, though, with the goal of showing how war affected middle- or lower-class men, and especially women, and you spend a great deal more time chasing down details. Sometimes vital information has vanished into the chaos if war, and a precise answer cannot be found. And in my answer to your first question, I explained why there hasn’t, until recently, been as much documentation available for the Carolinas. While all that is often frustrating to a history scholar, it can be a boon to a historical novelist.

Q. So far as I know you have only written to date about this single historical setting. Are you planning at some point to branch out to other places and times, or are you committed to this one?

Q. What is coming up later in the year for you? Are you able to share any plans? Can we expect another Michael Stoddard thriller?

A. October 2015, I expect to release Deadly Occupation (Michael Stoddard #0).

Finally, is there anything you would like to add which we have not touched on so far?

You’ve provided a purchase link to my five books on Amazon. In electronic format, they’re also available for Nook, Apple, and Kobo.

Thanks Suzanne for taking the time today to talk with me. All the best for you in the future.

Award-winning novelist Suzanne Adair is a Florida native who lives in a two hundred-year-old city at the edge of the North Carolina Piedmont named for an English explorer who was beheaded. Her suspense and thrillers transport readers to the Southern theater of the Revolutionary War, where she brings historic towns, battles, and people to life. She fuels her creativity with Revolutionary War reenacting and visits to historic sites. When she’s not writing, she enjoys cooking, dancing, hiking, and spending time with her family. October 2015, look for the release of her next Michael Stoddard American Revolution Thriller, Deadly Occupation.